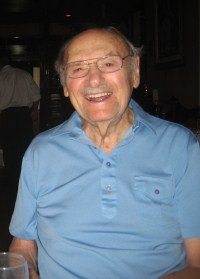 My father, Ted (Terry) Rosenbaum, is 93. Recently, he handed me a hundred page document he’d titled, “A Life Journey – Working for Social Justice.” It’s not quite a book; it’s more like a booklet, with a plastic cover and a spiral spine. He’s been mailing it to people across the country which, given his short term memory loss, is a much bigger challenge than it used to be.

For my dad, this book has been an act of defiance. He has decided it’s time to speak out about a period of his life which, for the last 57 years, he had kept relatively hidden from all but family and close friends.

In 1954, he was fired from his job as a public high school teacher in Brooklyn, New York and never taught American history again. As a civil rights activist, he supported a community protest against the killing, by a police officer, of an unarmed local black man who had dented a parked car. The New York City Board of Education demanded that my father submit to questioning about his political affiliations. Like many teachers, he was eventually summoned before Joseph McCarthy’s Senate investigating committee and asked if he was a communist. He never was, but if he answered, the next question would be, who do you know who is a communist? Not to “name names” meant he could be found in contempt and threatened with a jail sentence. He took the Fifth, the Constitution’s right against self-incrimination. After he was fired and blacklisted he became almost unemployable. Later, when he worked his way back into the work force and up the ladder, he changed his unusual first name and told no one why he was no longer a teacher.

It is hard to imagine the atmosphere of fear that pervaded American society during the Fifties. Lillian Hellman called it the Scoundrel Time. Terrified of what would happen to his family if he went to jail, my father’s good friend, a high school French teacher named Max Gilgoff, died of a heart attack in the street just before he was to testify. He was 38 years old.

My father never really talked about the toll his blacklisting took on him personally, but this week, as he began to distribute his book, he confided something that surprised me. His fear didn’t end with McCarthy, who died in 1957 after being publicly discredited. It didn’t even end in 1972, when the US Supreme Court reinstated him and other blacklisted teachers for their unconstitutional firing. “Twenty, thirty years later,” my father said, “I was still looking over my shoulder. I had made a life. I had a wife and two children, but anybody could come along – maybe someone who wanted to move up, or someone who didn’t agree with my politics – and say, hey, he’s that guy who was blacklisted, and I could lose my job. In my position as director of development at a major medical center, I couldn’t have a questionable reputation. It wouldn’t just hurt me, it could also hurt the institution.”

I wondered why now, 57 years later, my father had decided it was time to compile his old leaflets and documents outlining the injustice done to him. He still has misgivings about people knowing he was blacklisted. He wouldn’t even include the official transcript of his hearing before Senator McCarthy, which I had found online. In it, he sounds just like the man I grew up with, telling the Senator, “I stand with those patriotic Americans who wrote the Bill of Rights as a protection for innocent people against inquisitions of this kind.”

I asked him, why tell your story now? He said, “I never thought I’d see another time when people are so obviously being frightened into giving up hard won freedoms. What I did, standing up and speaking out, cost me a lot. Looking back, I realize the most important thing I can do at this stage of my life is to accentuate the positive by sharing my experience. If what happened to me can reach people and make them think, if I can teach American history again this way, then I’ve done my job as a citizen.”

This past month, people who call themselves the 99% ers have been staking their claim on the American political landscape. Their message has won the support of the majority in this country. To me, this says we are still a nation which remembers its aspirations; that we have not only individual rights but also social responsibilities to one another. In Laguna Woods, California, there’s a former American history teacher who would give them an “A.”